The Geopark Porphyryland abounds with about 50 different types of rock. Here, loose and solid rocks from 300 million years of earth history lie close together. The reason for the abundance of rocks and resources is the Permian super-volcanism, the deposits of the primeval North Sea in the Tertiary as well as the erratic blocks from the Ice Age.

Porphyry, or rhyolites to be geologically exact, has been used for centuries as building materials and building blocks. The porphyry tuffs of the Rochlitz Hill and the granite porphyry from the quarries around Beucha are particularly noteworthy. In contrast, the quartz porphyries from the Wurzen region, which are more grey in colour, lead a more modest existence. For traffic construction (railways, roads), however, they cannot be replaced as high-quality gravel and grit.

The porphyry’s weathering product, kaolin, has been mined between Mügeln and Wermsdorf for about 300 years. Without the “white earth” of Colditz, the alchemist Johann Friedrich Böttger would not have been able to produce the first white hard porcelain for Europe in 1708. To this day, kaolin is an increasingly important resource for the ceramics industry. The local kaolin mining industry utilizes the latest technology to extract the precious raw material.

Furthermore, the groundwater, extracted in the water villages Canitz and Wasewitz as well as in Naunhof, and the thermal spring in Bad Lausick are considered as precious resources within the Geoaprk Porphyryland.

In the following, we will introduce you to the most important stones and resources in the Geopark Porphyryland. 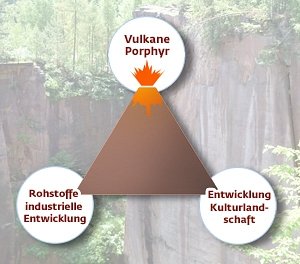 The Collmberg near Oschatz is the oldest hill in Saxony and an important landmark of the region. The Collmberg is mainly composed of Cambrian to Ordovician greywackes (around 500 million years old). This hard rock has been used for construction purposes for a long time, especially for building foundations and walls. After crushing it was also widely used for road construction.

The Quartzite from Glossen was formed by precipitation of silica solutions in Tertiary sand layers. The SiO2 content is more than 95%. This tertiary quartzite is found in 1 to 4 m thick banks and is covered by Pleistocene weathered loess...

Limestone was formed at the edge of the Mügeln Basin near Paschkowitz and Schrebitz around 240 million years ago during the Zechstein age. The rock is finely laminated and has a higher magnesium content, which is why it is also known as Plattendolomit (platy dolomite)...

The platy structure is typical for the Pyroxene-quartz porphyry of Wermsdorf. This rock was used for building the hunting lodges and paving the castle yards.

The Quartz porphyry of Steinberg in Sornzig, - the lava type is also known as “Kemmlitz Porphyry“  – is a volcanic rock containing quartz and feldspar crystals dispersed in a dense matrix. The hard rock has been used for construction purposes since the Middle Ages ...

Kaolin has been mined in our region since the end of the 18th century. The raw material is used in the production of fine ceramics such as earthenware, porcelain, insulators, sanitary ceramics and tiles.

Rochlitz Porphyry is a solidified pyroclastic flow (ignimbrite) that erupted here during the Rotliegend age around 290 million years ago. Since the early Middle Ages it has been used in many ecclesiastical and secular buildings.