The Beucha granite porphyry – according to the composition of the rocks a micro-syenogranite – has largely become known as an ashlar through the construction of the Monument to the Battle of the Nations in Leipzig. The monument was dedicated in 1913 on the occasion of the centennial of the decisive battle in the Wars of Liberation against Napoleonic France.

Beucha granite porphyry has already been used as a building material (ashlar) since the 15th century. In the 19th century its mining was intensified through the use of industrial methods. Along with the Kirchbruch (“church quarry”), numerous other quarries such as the Tollert quarry, the Sorge quarry and the local Hausbruch quarry in Leipzig arose in and around Beucha. In Leipzig the granite porphyry was for example used in building the main railway station, the German Library and the Old Town Hall. The history of the quarry sites can be followed on the circular path “7-Brüche-Wanderweg”.

The now approximately 80 metres high elevation called Kirchberg has existed for almost 35 million years. During the glacial period it was “polished” to its present sheepback shape. Quarries later “gnawed” away at it. The intensive quarrying in the area of the church, a Romanesque choir tower church known as the Beucha mountain church, gave the building its exposed position on the spur. The quarry was abandoned at the end of the 1950s. Today the church quarry has been flooded and is being used as a local recreation area.

The Beucha granite porphyry was also used to build the “mountain” church itself. It is visible at many of the polished sections of the church. The rock has a red to greenish microcrystalline groundmass with numerous millimetre to centimetre sized phenocrysts consisting of feldspar, quartz and pyroxene. It emerged 287 – 285 Millionen million years ago in the Lower Rotliegend (Permian) when acidic magma rich in quartz intrudet into the bedrock and then solidified in the shape of veins and stocks at a depth of approximately one kilometre. This caused numerous other fragments of other rocks to be enclosed by the magma and carried away with it on its way to the top. This has given the rocks their attractive appearance. Because of its fissility, hardness and weather resistance, the Beucha granite porphyry can ideally be used as ashlar. The stone is frost-resistant and easily polished. It is used as an architectural stone (carving stone) for staircases and flooring, as a pavement, and for tombstones and in gardens. 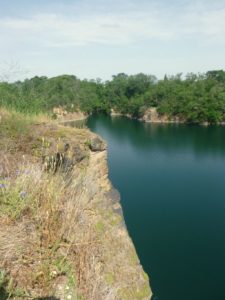 View over the flooded quarry seen from the observation point of the church, Photo: Anja Hartmann 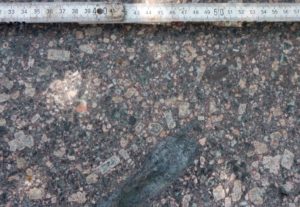 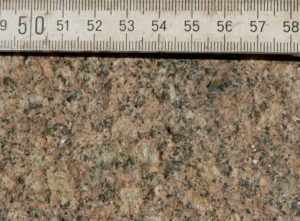 Granite porphyry used for a windowsill of the church, Photo: Anja Hartmann 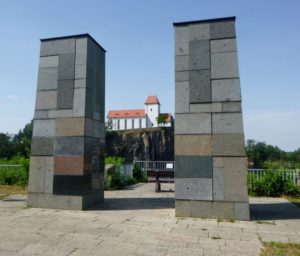